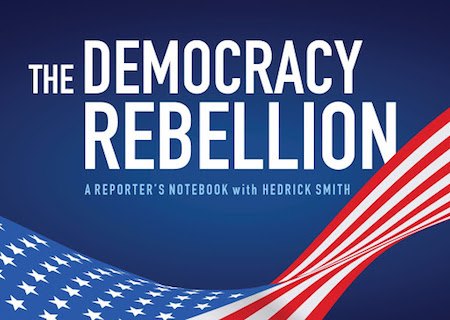 Join Fix Democracy First for a film screening of The Democracy Rebellion, plus a special conversation with the filmmaker, award winning journalist Hedrick Smith.

Register here.
After registering, you will receive a confirmation email containing information about joining the webinar.

Democracy Rebellion: A Reporter's Notebook is a documentary by journalist and filmmaker Hedrick Smith, who traveled the country looking for positive stories of democratic reform and finds them in six states where grassroots activists are fighting to equal the playing field, including Washington State's I-735 campaign.

Hedrick Smith is an award winning journalist, reporter and former editor for The New York Times, a producer/correspondent for the PBS show Frontline, and author of several books.

Topic: The Push to Take Over State Elections. Join us from 5-6:30pm PT for a weekly discussion about our democracy.

Topic: How Do We Win the Fight for Democracy? Join us from 5-6:30pm PT for a weekly discussion about our democracy.