Unrig: How to Fix Our Broken Democracy with author Daniel Newman 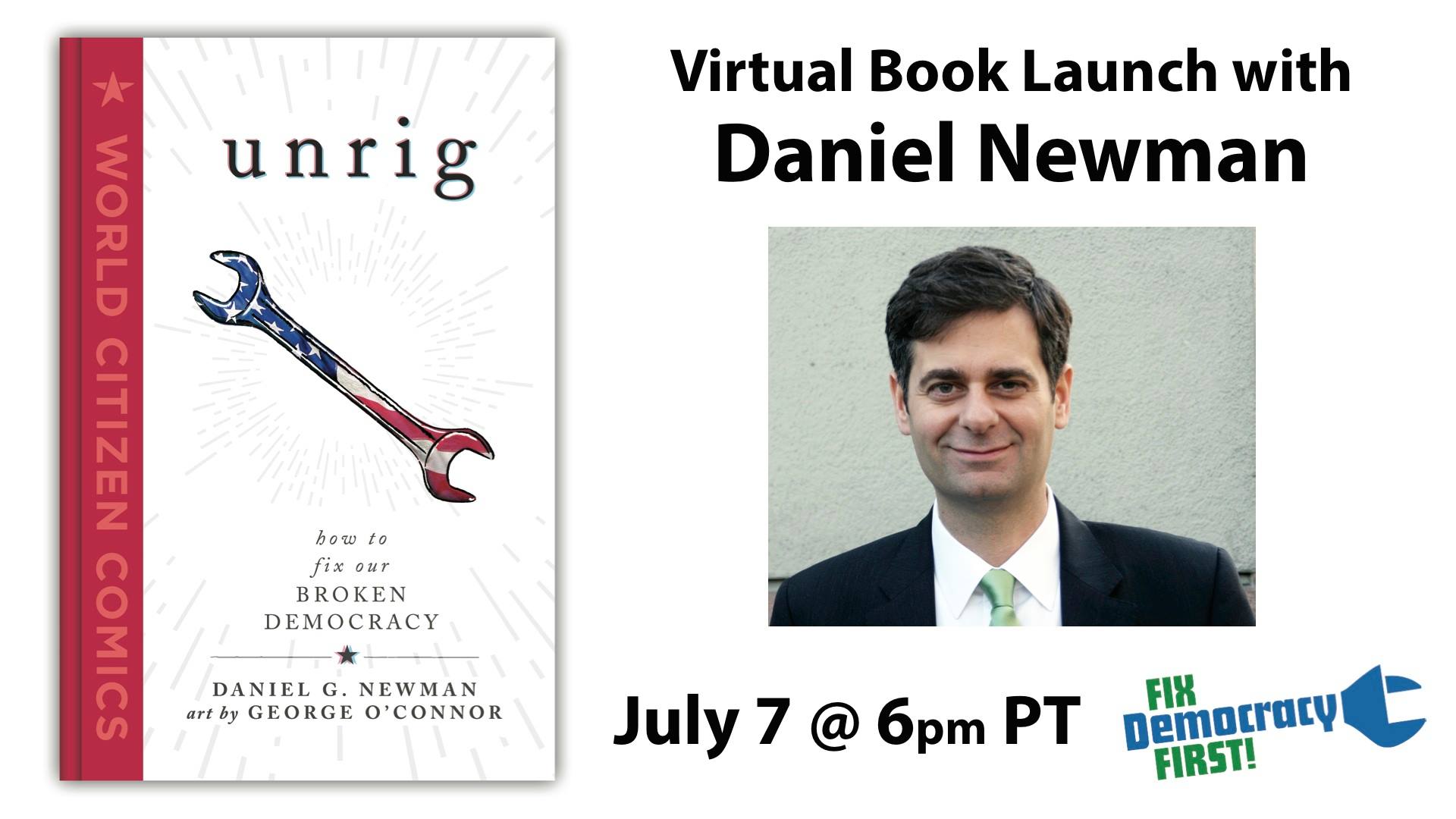 Fix Democracy First is proud to host the virtual launch of UNRIG: How to Fix Our Broken Democracy with author Daniel Newman, and special guest Estevan Munoz-Howard.

UNRIG: How to Fix Our Broken Democracy
An intriguing and accessible nonfiction graphic novel about the role wealth and influence play in American democracy, featuring the successful campaign for democracy vouchers in Seattle.

Unrig exposes the twisted roots of our broken democracy and highlights the heroic efforts of those unrigging the system to return power to We the People--including local activists in Seattle.

This stirring nonfiction graphic novel by democracy reform leader Daniel G. Newman and artist George O’Connor takes readers behind the scenes—from the sweaty cubicles where senators dial corporate CEOs for dollars, to lavish retreats where billionaires boost their favored candidates, to the map rooms where lawmakers scheme to handpick their voters.

AUTHOR: Daniel G. Newman is a national expert on government accountability and money in politics. He is president and co-founder of MapLight, a nonpartisan nonprofit that promotes transparency and political reform. He led a ballot measure campaign establishing public funding of elections in Berkeley, CA, and was named one of Fast Company’s 100 Most Creative People in Business. Newman received an MA in political psychology from U.C. Berkeley and a BA from Brown, and was a Fellow at the Safra Center for Ethics at Harvard. He lives in the San Francisco Bay Area.

SPECIAL GUEST: Estevan Muñoz-Howard is the Program Officer for Money in Politics Reform at the Piper Fund. He is a strong advocate for fair representation and racial equity in our political system. He helped to lead the successful 2015 Honest Elections Seattle campaign—a historic initiative to implement a democracy voucher program. Estevan currently serves as the co-chair of the Money in Politics Working Group at the Funders’ Committee for Civic Participation. He lives in Seattle, WA.

Below is a recording of the July 7th virtual event:

Suppressed: The Fight to Vote, the new documentary by Robert Greenwald (Director of Outfoxed, Walmart: The High Cost of Low Price, and Making A Killing: Guns, Greed, & the NRA) weaves together personal stories from voters across the state of Georgia to paint an undeniable picture of voter suppression in the 2018 midterm election where Stacey Abrams fought to become the first Black female governor in the U.S. The issues Georgians faced included polling place closures, voter purges, missing absentee ballots, extreme wait times and a host of voter ID issues – all of which disproportionately prevented many students and people of color from casting their ballots. Suppressed: The Fight to Vote features experts, poll watchers and everyday Georgians speaking to the reality of voter suppression and the threat it poses in 2020. In a race that was ultimately decided by 54,723 votes, the film exposes that the basic constitutional right to vote continues to be under siege in America.

Topic: Are We Coming Closer to Civil War? Join us from 5-6:30pm PT for a weekly discussion about our democracy.

Topic: Youth Involvement to Strengthen Democracy. Join us from 5-6:30pm PT for a weekly discussion about our democracy.